Disney’s Beauty and the Beast, the award-winning worldwide smash hit Broadway musical, is coming to Bowling Green as part of the SKyPAC Broadway series. Produced by NETworks Presentations, this elaborate theatrical production will come to life on stage for three performances on February 28 and March 1, 2015. Tickets go on sale this Friday, December 5, 2014 at 11:00 a.m. For additional information on performance times and tickets, visit www.theSKyPAC.com.

Get tickets in advance! Become a SKyPAC Member Today! By becoming a SKyPAC Member today you will receive the opportunity to purchase tickets and get the best seats available before they go on sale to the public for this performance and future performances. Contact Deborah Stein at 270-904-5002 for more details.

The original creators of the Broadway production have reunited for this new touring production. The play is directed by Rob Roth and choreographed by Matt West, with Costume Design by Ann Hould-Ward (Tony Award® winner for her work on Disney’s Beauty and the Beast), Lighting Design by Natasha Katz (three-time Tony Award® winner), Scenic Design by Stanley A. Meyer, Sound Design by John Petrafesa Jr. and Music Supervision by Michael Kosarin.  For more information about this production visit http://www.disneysbeautyandthebeast.com

Disney’s Beauty and the Beast is the classic story of Belle, a young woman in a 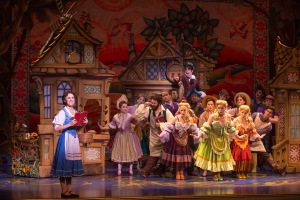 provincial town, and the Beast, who is really a young prince trapped in a spell placed by an enchantress. If the Beast can learn to love and be loved, the curse will end and he will be transformed to his former self. But time is running out. If the Beast does not learn his lesson soon, he and his household will be doomed for all eternity.

Based on the 1991 Academy Award®-winning animated feature film and celebrating 20 years since its Broadway premiere in 1994, Disney’s Beauty and the Beast has become an international sensation that has been seen by over 35 million people worldwide in 22 countries, and has been translated into 9 different languages. This production launched in February 2010 and has been seen by 2.5 million people while playing more than 1,000 performances in all 50 United States and 6 Canadian Provinces. Currently, there are four other productions playing around the world including Paris, tours in Japan and Germany, and a new international tour that currently will visit more than 12 countries in two years.

NETworks Presentations LLC (Producer) from its inception nearly 20 years ago has been an industry-leading producer of touring musical theatre productions and remains committed to delivering quality entertainment to its audiences. Having toured over 60 productions extensively throughout North America, NETworks is now expanding its tours into many international markets including South America, Greece, Italy, Turkey, and South East Asia. Its current touring season includes Cameron Mackintosh’s The Phantom of the Opera, Disney’s Beauty and the Beast, Dirty Dancing, Blue Man Group, Flashdance, Anything Goes and Elf the Musical.

SCOTTSVILLE — Several organizations are teaming up in Scottsville on a community art project that will result in the painting of a mural promoting the city.

Heart of Scottsville, a nonprofit organization dedicated to preservation and economic development of the city’s downtown area, and Allen County Schools hosted a mural workshop Thursday at the Allen County Cooperative Extension Office.

Working with Bowling Green artist Andee Rudloff, education director for the Southern Kentucky Performing Arts Center, about 15 people gathered to sketch out ideas, drawing in pencil and then painting their concepts for the mural on a synthetic housewrap surface.

“I want to make sure everyone here is part of the final composition,” Rudloff said while taking a break from mixing paints.

The project has also involved the cooperation of the Scottsville Art Guild and Haven 4 Change, where the mural will ultimately be painted next month.

Before the drawing began, Rudloff guided everyone through a quick brainstorming session in which people were encouraged to come up with a list of five words or concepts that best represent Scottsville and then make a simple drawing to represent each word.

The workshop also involved a little encouragement from Rudloff for people who might not have considered themselves artists.

“Once you trust yourself with the brush and once you see yourself as an artist, your experience gets richer and richer,” Rudloff said.

Things and ideas such as horses, farms, downtown, friendliness and Barren River Lake State Resort Park were sketched out and then painted by those in attendance.

Rudloff said the ideas fleshed out Thursday would eventually be incorporated into the mural, which will be painted June 9 on a 35-foot wood fence at Haven 4 Change on Hillview Drive.

Jamie Boler, executive director of Heart of Scottsville, worked on painting an illustration of a streetlight to represent historic downtown.

Boler said he was encouraged by the turnout at Thursday’s workshop and looked forward to additional participation from the community on the mural.

“The goal is for this to be a community project,” Boler said. “We want the community to come out and help us put this together, and hopefully they can see the unifying power that the arts can have in the community.”

The date of the mural painting coincides with the first night of this year’s Arts on Main Summer Concert Series, held on the second and fourth Saturdays of June, July and

August in downtown Scottsville next to U.S. Bank.

What are you looking for?